One of the main issues with these trucks and batteries that comes up on the forums and social media is “Passenger Side Battery Boiling” or “Drivers Side Battery Low Voltage”.

There are at least a couple of reasons this may happen:

1. Poor battery cable connections along the charging path
2. One battery has a bad cell

Example 1: The usual issue causing both of these problems is a poor battery connection along the charging path shown below: 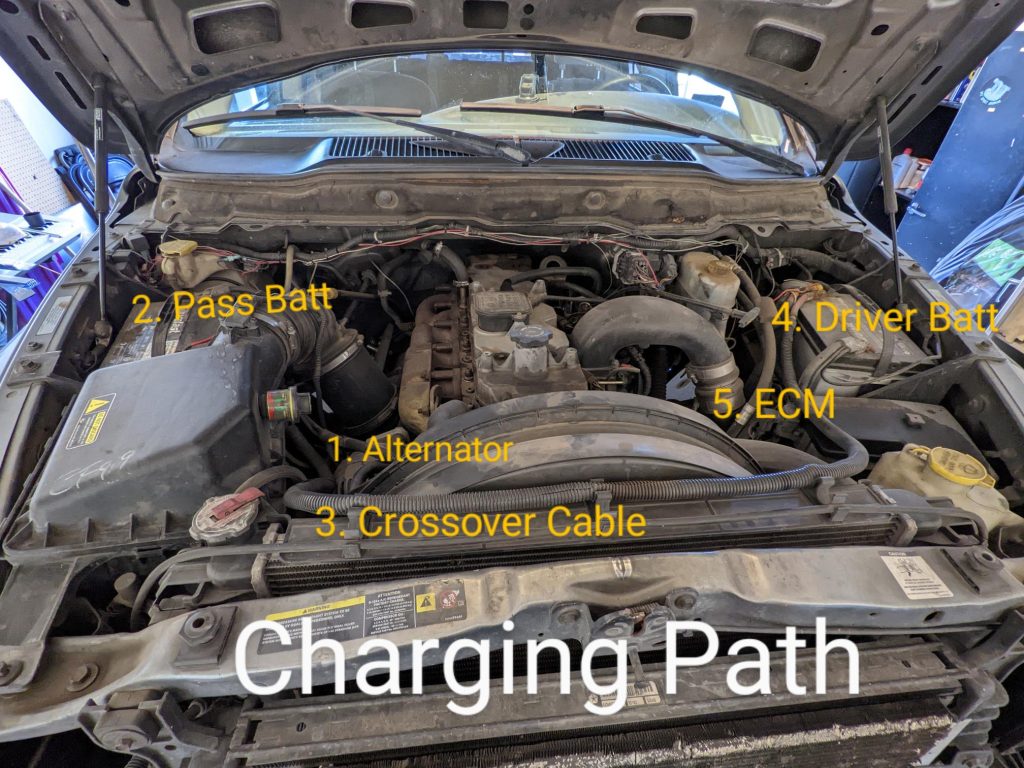 Typically the issue is found at the crossover cable.  What will happen is the charging voltage from the alternator gets applied tot he passenger side battery.  This battery is connected in parallell with the drivers side battery via the crossovercable which should charge at an equal rate– but with a bad connection along the way what actually happens is the charging voltage never makes it to the drivers side battery which is also where the ECM senses for battery voltage and decides how much juice the alternator sends out.

Things should be starting to click in your head right now, this creates what is called a positive feedback loop in the charging system.  As the drivers side battery gets lower from operating the vehicle, the ECM commands more voltage from the alternator which is now overcharging the passenger side battery due to the poor connection and the drivers side battery continues to get lower and the ECM commands more voltage and so on until there is a failure of some kind.

The best solution to example 1 I have found is to switch to AGM style batteries which do not leak acid onto the battery terminals.  AGM stands for advanced glass matt and does not require any maintenance like normal flooded cell batteries do.  They do cost a little more, but I have found the cost to be well worth it.

See my tuning in action…

An early version of my towing tune…

Cart has been replaced

Login first to save cart
Back